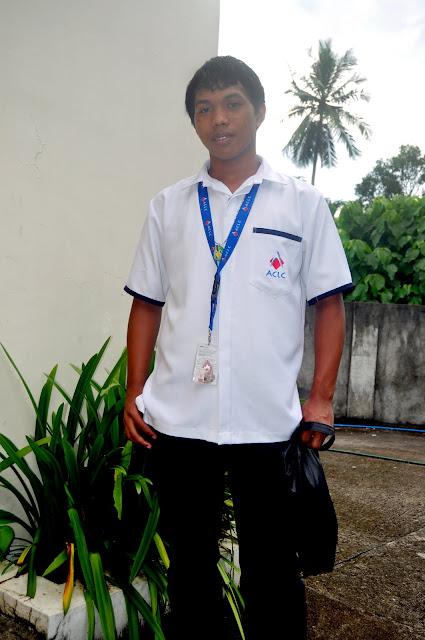 When we met Jefferson Bon he was a hungry, dirty, discouraged thirteen year old boy roaming the streets. Six years later, at nineteen, he’s a healthy and happy young man attending his first year of college. Here’s his story:“I was the fifth of nine children. My father was a porter, and my mother sold boiled eggs to earn for our daily needs. When I was young we enjoyed a decent life with my Grandmother who supported us; but when she died our lives became miserable.”My father was also hurt in a warehouse accident, and could no longer work. Because of poverty and many problems my mother started getting drunk every day. Then she began to be abusive. One time I was so embarrassed by her treatment I decided to leave home. My heart was aching and full of anger, and I was so disappointed with my parents. Eventually I did return, but I told my mother, “If you’re going to hurt me again, I would rather live on the streets.” From that time she did not treat me badly.

“When I was 10 my Mom and I started to collect cardboard to sell to the junk shops. We earned just enough for daily meals. Every night I roamed the city and marketplace to find cardboard, and soon became familiar with the entire City.

One night when we returned home my father called me. He was drunk, and when I went to him he started hitting me for no reason. The next day I left home for good. I spent my days and nights at the market area where I made new friends; but I was always thinking of my family, wondering if they had food to eat.

“I started learning bad things, like drinking alcohol, smoking, cussing, stealing, and begging for money to satisfy my vices. I also got involved with a gang of street kids who were always in trouble. My life was going from bad to worse very fast.

“Then one day a friend of mine invited me to a house where he claimed there was free food. I went along and found the people there were Christians, and the house had a sign saying Face the Children. That’s where I started to hear the Word of God, and for the first time began thinking about changing my life.

“One night at the city lake Jeff Rice and some other Frontline workers came and woke us up. They gave us food, then shared the Word of God. The next day they returned to give us more food, and prayed for us. They also invited us to the church to watch a movie, where we had snacks and enjoyed a Christian film. We were allowed to sleep at the church, and also told we could stay, and become a part of the Face the Children center. I was one of the kids who chose to stay, and it was such a blessing for me to be there! It was there that I started my studies again. I experienced having my own personal belongings, and to eat decent meals three times a day. I learned to love myself and my neighbors, to go to church, to pray and read the Bible and, most of all forgive those who hurt me.

“I thank God for Frontline and all the supporters who help to reach children like me. Because of this ministry I’m now in my second year of college learning internet technologies! My prayer is to finish college, find a good job, and be helpful to others.