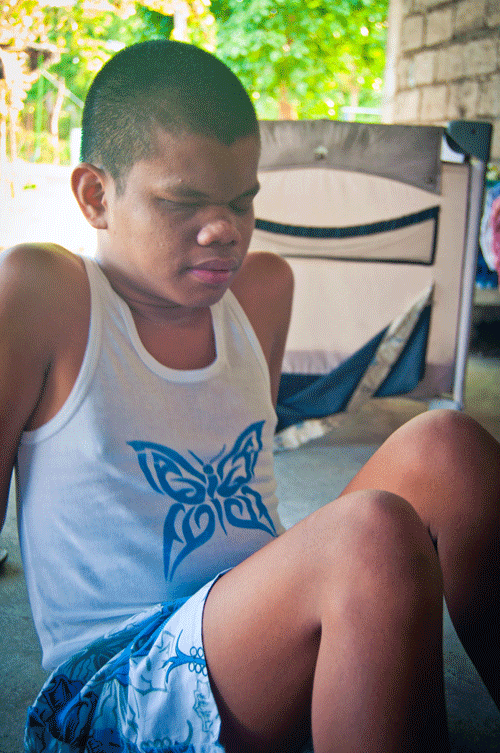 Eugene Lance Diaz, aka “Lan Lan”, was born to Leona, a woman who became a victim of a fatal stabbing in 1998 by a drug addicted man. After Leona died, her husband went back to his home province to try to forget the pain, leaving Eugene (who was then only three years old) in the care of a distant aunt.

Lan Lan was already blind and did not know how to communicate with the rest of the world. Due to his handicap, and because of impoverished circumstances, this became a serious point of tension between the husband and wife whom Lan Lan was abandoned to. They said Eugene was an “added burden” and became the center of their quarrels and strife. Unimaginably, Eugene was transferred to a tiny shack in the middle of a field which, by all standards, was unsuitable for any human to live in. He was not tended to properly, not fed regularly, and endured years of deprivation and aloneness. He became sickly and malnourished.

In 2006 the Frontline staff became aware of Eugene, and in only a matter of a few days were able to rescue him and gain custody. Since then he has grown and developed, and has undergone several surgeries to repair problems with his digestive system. After a one-year ordeal with these surgical procedures, Eugene began to grow physically, advanced through puberty, and has experienced an overall improved quality of life. Despite his blindness, He can now walk from his living quarters to the kitchen, to the bathroom, and back again. He feeds himself, can remove his own clothes, and put his own shirt back on. Though he is healthier now, and can still learn, much time and opportunity was lost in his formative years, and development is painfully slow. His comprehension continues to grow as far as listening, understanding, and obeying, but he still cannot communicate in full sentences with any structure. And his blindness is diagnosed as irreversible.

We thank God for Susan, Eugene’s full time caretaker. She loves him, is committed to him, and has helped him grow and advance in his independence. Face the Children continues to be committed to helping children victimized by abuse, abandonment, or dangerous neglect. Although not every story finishes the way we hoped it would, we know that God LOVES all the children and has a plan for their lives.